It Was A Construction Theme Party

A little boy in Panorama's class had a birthday party over the weekend with a construction theme. The morning of the party, I rushing around trying to prepare my office/guestroom for a visiting relative and also digging for some non-pink, non-princess wrapping paper. While rooting through the 40 tons of obsolete subdivision plans under my desk, I had a brainstorm.

I always like keeping a few rolls of old plans around for coloring. It is particularly fun to trace a toddler's whole body on the back of a Arch D sheet. The first time I took a boxful of dead plans to my cousin's house for her little kids, they approached me shyly and asked if they were allowed to color on the printed side. I was pretty amazed- the kids really like coloring in the neighborhood plats, profiles and even the Erosion Control Details. I like that I they are getting just a little bit familiar with my work, not to mention that instead of buying big sheets of new paper, they were reusing some paper that would be recycled. Win-win-win-fun.

So the brainstorm. Panorama colored a subdivision utility plan, and we wrapped the gift. I made Mr. Probert go out to the shed where I keep a few rolls of survey tape and some lath. I couldn't figure out how to incorporate the lath, but the survey tape made a heck of a bow. 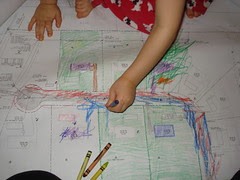 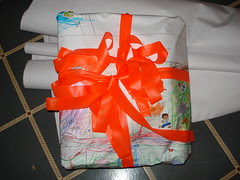 Mr. Probert said that I was a big dork and that nobody would "get it" except me. He said the other moms would just think I am too cheap to buy wrapping paper and that I have horrible taste in ribbon. He was right, but it was fun anyway. 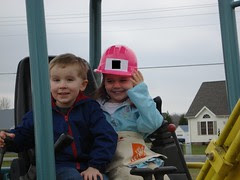 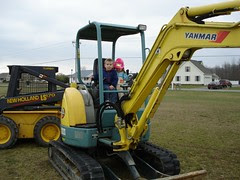 I think it was a great idea.

you may have seen it already, but since I know you love this stuff... check out http://www.theconstructiongame.com/tcg/const.asp

by the way, i aspire to the day when my daughter colors her first subdivision (we're still on circles and toddler outlines)

James' wife thinks this is ABSOLUTELY GENIUS! Especially since we have a few of those around ourselves.