The Millsboro Public Library Thanks You for Your Support

So a few people have asked me "What's the deal with the ads on your blog?"

Well, it's an experiment.

At first I thought it would be nice if Civil 3D Rocks generated enough revenue to pay the loan on my farm every month (approx $1200 per month). When that didn't happen, I thought well maybe it can generate enough revenue to pay my mortgage (approx. $800 per month). Hmm. OK, no dice there. Car payment? No. Groceries? Nyet. Then how much money could I make from ad revenue on Rocks?

What could it possibly pay for?

This week, I figured out what your clicks can help me with...

Around Halloween, Pannie and I made our weekly trip to the library and borrowed this book: 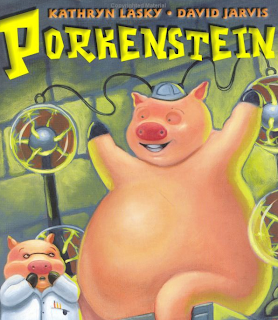 It's one of those books that kids latch on to that adults HATE from the first reading. I couldn't have been gladder to get it the heck out of my house two weeks later.

A few days hence, I check my library account online and see that I haven't actually returned Porkenstein. Dang it. There must be a mistake. I returned every one of those stupid books, right? We had a similar experience with an equally annoying book (Time to Pee!). The librarian "tsk tsk"ed me while looking up over her spectacles-on-a-chain and accused me of setting a bad example for my daughter. Not only was I harboring illegal children's books but she knew for a fact that the week before Mr. Probert had the audacity to attempt to use my library card instead of his own. I was extremely pregnant at the time, so I waddled over to the shelf and located the craptastic piece of literature, then in an act of extreme irony, I shuffled off to the bathroom. I foresaw a similar confrontation in my future over Porkenstein.

In early October, Mr. Probert had set up our two man tent in the backyard so that he and Pannie could have a last few camp outs. Time passed and things got busy and the tent just stayed pitched long after it was too cold for sleeping bags and ghost stories.

Well, last week he finally packed the tent away. And guess what was inside? Freakin' Porkenstein

So... Google Ads earn me about $0.10 per day which is equal to the daily rate for delinquent books at the Millsboro Public Library. Thanks to Civil 3D Rocks, I can thumb my nose at due dates once and for all. At least for one book at a time.